skip to main | skip to sidebar

A Gift for Two

"It was a beautiful day for sightseeing around downtown Portland. We were a bunch of counselors on our day off, away from the campers, just out for some fun. The weather was perfect for a picnic, so when lunch time came, we set our sights on a small park in town. Since we all had different cravings, we decided to split up, get what each of us wanted, and meet back on the grass in a few minutes.

"When my friend Robby headed for a hot dog stand, I decided to keep her company. We watched the vendor put together the perfect hot dog, just the way Robby wanted it. But when she took out her money to pay him, the man surprised us. 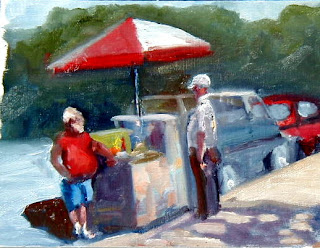 "It looks a little on the cool side," he said, "so never mind paying me. This will be my freebie of the day."
"We said our thanks, joined our friends in the park, and dug into our food. But as we talked and ate, I was distracted by a man sitting alone nearby, looking at us. I could tell that he hadn't showered for days. Another homeless person, I thought, like all the others you see in cities. I didn't pay much more attention than that.
"We finished eating and decided to head off for more sightseeing. But when Robby and I went to the garbage can to throw away my lunch bag, I heard a strong voice ask, "There isn't any food in the bag, is there?"
"It was the man who had been watching us. I didn't know what to say. "No, I ate it already."
"Oh," was his only answer, with no shame in his voice at all. He was obviously hungry, couldn't bear to see anything thrown away, and was used to asking this question.
"I felt bad for the man, but I didn't know what I could do. That's when Robby said, "I'll be right back. Please wait for me for a minute," and ran off. I watched curiously as she went across to the hot dog stand. Then I realized what she was doing. She bought a hot dog, crossed back to the trash can, and gave the hungry man the food.
"When she came back to us, Robby said simply, "I was just passing on the kindness that someone gave to me."
"That day I learned how generosity can go farther than the person you give to. By giving, you teach others how to give also."
--by: Andrea Hensley, "Chicken Soup for the Teenage Soul"
What have you "paid forward" this week?

(Photo courtesy of Google Images.)
Posted by Megs at 9:57 PM

Megs
Director of Youth and Outreach at St. Paul's United Methodist Church AND a daughter, a sister, a wife, a friend, an aunt, a god-mother, a volunteer, a woman of faith, and one who chooses to live in joy and gratefulness... Here I write mostly about faith and life - and would love to hear your comments and stories, for I believe that is how we learn and grow together!